Online Retailers, E-books Continue to Grow Ahead of Traditional Publishing and Bookstores 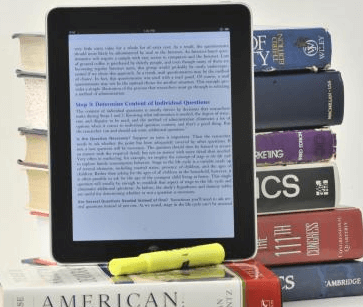 Some schools are now forcing students to use e-textbooks.

E-books captured 11% of all book spending last year, up from 7% in 2011, Kulo reported, while e-books accounted for 22% of units in 2012, up from 14% the prior year. In 2010, e-books accounted for only 2% of spending. Despite the gains made by digital, paperback remained the most popular format last year, accounting for 43% of spending, down one percentage point from 2011, while hardcovers represented 37% of dollar sales, down from 39%.

The growth in the e-book format last year was one of the factors that increased e-commerce’s lead as the largest channel for book sales, Kulo noted. Online retailers, led by Amazon, accounted for 44% of sales in 2012, up from 39% in 2011. The gains made by online retailers came at the expense of bookstore chains, whose market share fell to 19%, from 26% in 2011. As consumers buy more e-books they also tend to buy more print books from the same outlet—a trend that has cemented Amazon’s position as the country’s largest booksellers, Kulo said. According to the Bowker data, Amazon captured 31% of dollars spent on all books last year, up from 26% in 2011. Despite the chains’ loss of market share, they were the only other channel besides online retailers to have a slice of the book market that was bigger than 10%. Together, chains and online retailers accounted for 63% of spending in the year, up from 56% in 2009. Independent bookstores had a 6% share of spending in the year, the same as in 2011.

Kulo also noted that the Kindle remained the most popular reading device among e-book buyers in 2012, although some members of the Kindle family gained share while others lost ground. Kindle e-ink devices fell from a 43% share in 2011 to 40% last year, but the percentage of e-book buyers who reported owning a Kindle Fire, released in fall 2011, rose to 20% in 2012, from a low base the prior year. Despite a bad holiday season, Nook was used by 15% of e-book buyers last year—the same level as in 2011. Ownership of iPads remained relatively low among e-book buyers at 19%, up from 15% in 2011. The Kindle family, by a wide margin, was also the most popular group of devices used by e-book buyers to download e-books in 2012, with 55% of the e-book buyers using either the e-ink or tablet versions. The Nook, which held second place, was used by 14%. Tablets, including iPads, came in third at 13%.

More data relating to buying trends and consumer book-buying behavior will be included in the upcoming edition of the 2013 U.S. Book Consumer Demographics and Buying Behaviors Annual Review, to be published by Bowker in June.