A Touch Screen for Your Kindle? 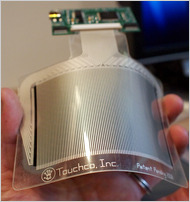 Coming to the Kindel?

Touchco uses a technology called interpolating force-sensitive resistance, which it puts into displays that can be completely transparent and could cost as little as $10 a square foot. The capacitive touch screens used in the iPad and iPhone are considerably more expensive. Unlike those screens, the Touchco screens can also detect an unlimited number of simultaneous touch points.

The e-ink technology used in today’s Kindle products is much easier on the eyes than the lighted displays of most devices but we know that on screen viewing will continue to improve.

Do you need color on your book reading app?